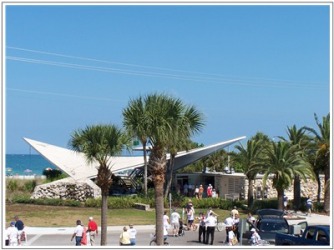 Venice Island has over fourteen miles of wonderful, sunny, sandy beaches.  I feel they are some of the best in Florida.

One of the reasons for that is Venice is a smaller town which means the beaches are generally quieter here rather than over run with tourists staying in high rise hotels.

In fact there are only two small beach front motels on the island, people able to get a room there are lucky indeed.

This page will cover the five most prominent beaches on the island from the south end to the north. 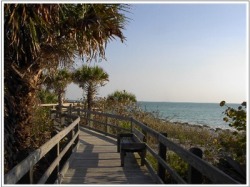 If you want a quiet place to get back to nature Caspersen Beach is it.  There is not a condo or hotel tower to be seen from here.  Even the nearest beach house is over a mile and a half away, but with the curve of the shore you wouldn’t even know it was that close.

The nature preserve feels like it extends for miles here and I believe it does.  The preserve area also extends well behind the beach to the Inter-coastal Waterway with an abundance of nature trails.  So this really feels like a back to nature escape. 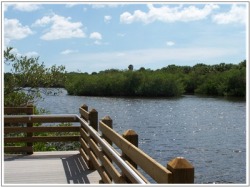 Even with the nature preserve there are modern amenities at Caspersen Beach such as showers, restrooms, picnic tables, and a large board walk over sensitive coastal plant areas.

In the nature preserve across a small bridge behind the beach there are paved trails with fitness stops and a fishing dock. There is also more parking and picnic tables including a covered shelter and a covered children’s playground.

This is also a great place to go kayaking and boating through the mangroves.

Caspersen Beach is one of the few areas in Florida I’ve seen with natural rocks on the beach, many people may not like that, but I find it interesting.  While there aren’t really tide pools here the rocky areas do support some sea life that you won't find on plain flat sandy beaches. 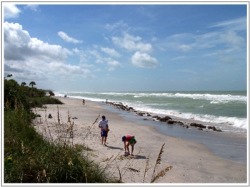 The sand on Caspersen Beach is mixed with a lot of shells and fossilized sharks teeth making beach combing a very popular pursuit here.

Down the beach north of the parking there is an area of small sand dunes, they are small, but this is the only place I’ve seen that on the gulf coast as well.  It just another thing here that reinforces to me that this is a more natural rather than an over developed area.

Whether you can get completely back to nature here or not Caspersen Beach is a great place to get closer to it and away from the stress of daily living. 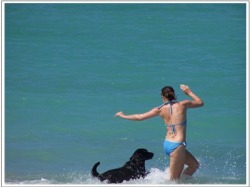 Venice Island’s Paw Park at Brohard Park is one of only few places dogs are allowed to play in the surf in Sarasota County, making it an easy choice as best beach for dogs.

It’s not just that dogs are allowed here, they are catered to.  There are separate fenced areas for large and small dogs to run around and play in.  An automatic fountain and a doggie shower.  For the dogs human pets there are also picnic tables in sun and shade.

The dogs favorite part though really is the beach behind this park.  There they are free to run on the sand and romp in the surf.  If you dog responds well to voice commands they can be leash free, if not it is asked that you keep them on a leash.  There are also leash posts on the beach as well as disposable doggie bags and trashcans.

Paw Park is an exceptional place to let your dogs out to enjoy the surf and sand of a great Florida beach.

This park is also getting a large expansion of facilities for human visitors as well. 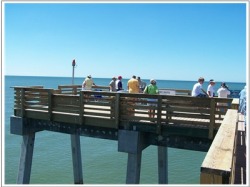 If you like a beach with a lot to do, the beach at the Venice Fishing Pier is the place for you.

First, obviously is the pier.  This is the only gulf beach fishing pier, not just in Venice, but in Sarasota County.  The large 700-foot long pier includes a bait shop and cleaning stations, no fishing licenses are required here.

Just in front of the pier is the only gulf beach restaurant I know of in Venice, and/or Sarasota County.  Sharky’s On The Pier boasts a great seafood menu and tropical drinks, plus live music in a festive Florida Keys atmosphere. It’s a great place to enjoy dining and dancing on a Gulf of Mexico beach! 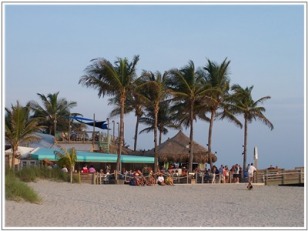 Venice is also known as the Sharks Tooth Capital of the World and this stretch of beach is one of the best to find fossilized sharks teeth.  If you don’t have a beach scoop for tooth hunting you can pick one up at the bait shop.

Additionally there are six picnic shelters, two sand volleyball courts, public restrooms, and a new pavilion with wheel chair access for great views of some of the incredible sunsets. 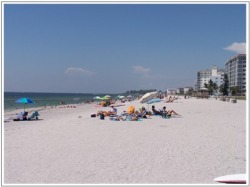 This beach pretty much is in the center of town.  If you’re driving west down Venice Ave. downtown just keep going straight, it ends at this beach.

There is actually a lot of action here as well, and given it’s central location and the condo towers around it, it is usually the busiest.

The beach pavilion here is a stunning Island landmark.  It is also a stunning departure from the Italian architectural influence that is so strong over most of the island. 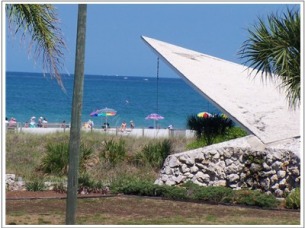 In this case it is, to me, a welcome departure due to the beauty of it’s design.  This bold mid-century modern masterpiece was designed by renowned architect: Cyril T. Tucker.  It features a hyperbolic parabolic roof soaring over two low buildings of coral stone and a large open air area with tables.

The shaded open area here is perfect for eating ice cream from the pavilion shop or playing chess, and backgammon. 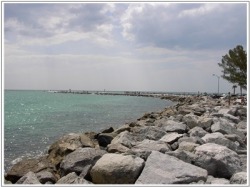 The South Jetty (also known as Humphris Park) is at the northern end of Venice Island on Tarpon Center Drive.  While I have it listed under beaches this is actually a jetty rather than a beach.  There is a condo beach next door but you almost have to climb over rocks to get to it.

The park here provides a great view of the gulf, boat traffic moving through the jetty’s in and out of Roberts Bay, plus spectacular sunsets.  South Jetty park offers picnic tables and benches for watching the scenery along with showers and restrooms.  There is also a nice concession stand making it a choice spot to sit back and enjoy the view while snacking.

The North Jetty on Casey Key is a nice large park, just a few feet away by water, a few miles by land.

The park is actually at the end of Tarpon Drive, not where the marker is on the map.
Top of Page - Home